Cannabis in Aspen: What It’s Like to Get High at a High-End Resort 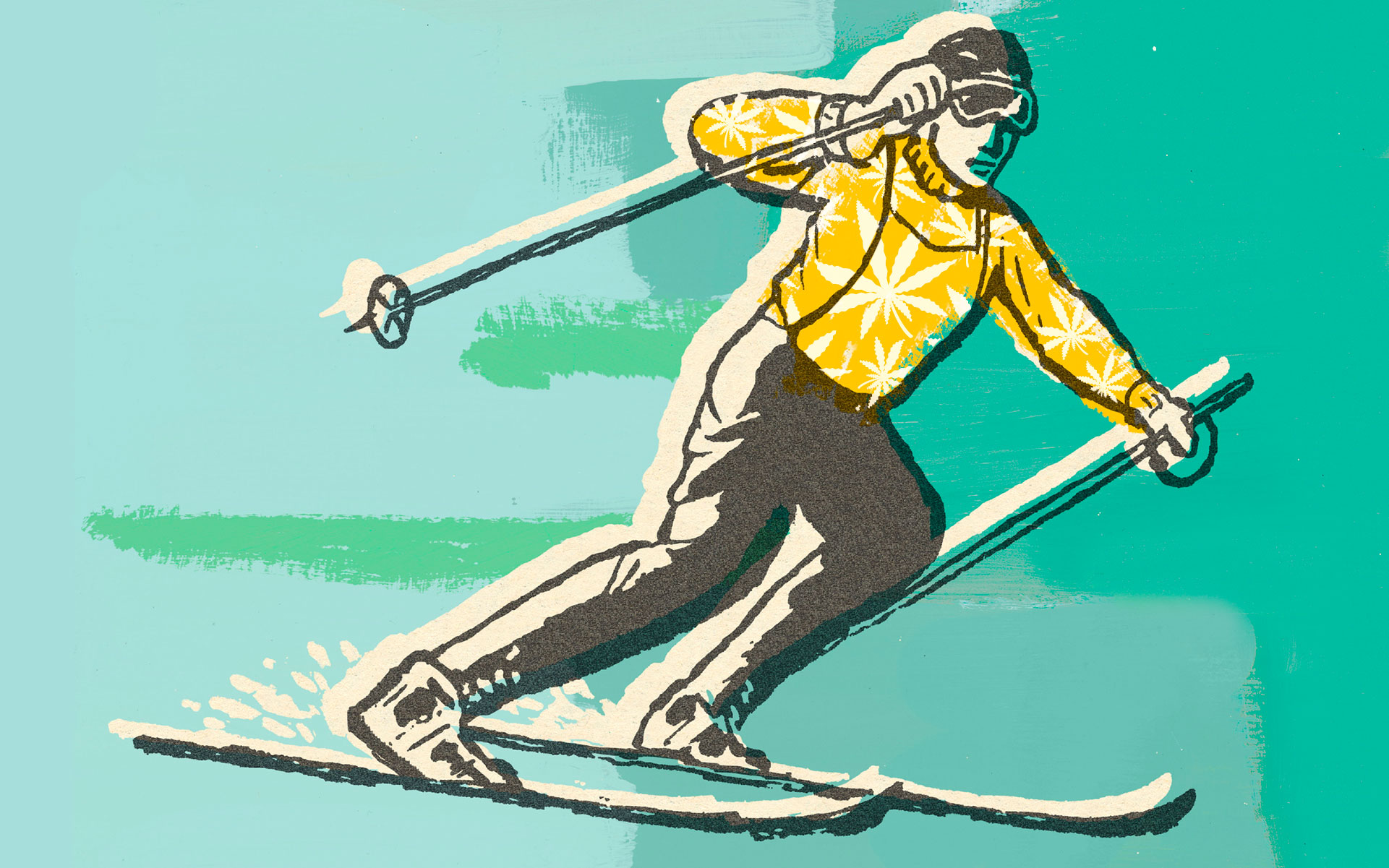 There’s Colorado, and then there’s Aspen.

Founded as a mining town about 140 years ago, Aspen has since morphed into a wealthy, world-famous ski resort. During the winter months, the town sees its population swell with celebrities, die-hard ski bums, the very, very rich, and the service workers who attend to them all. Even after the winter holidays, the area continues to attract tourists from all over the world with summer events like the annual Food & Wine Classic.

It’s a unique environment that, love it or hate it, has its own laid-back, pleasure dome vibe. And that unique vibe extends to Aspen’s recreational cannabis culture.

Looking for the Aspen Experience

During the height of the winter tourist season, customers at Aspen’s cannabis stores include a mix of locals and out-of-staters, many of whom come from illegal states and are new to cannabis.

Cannabis has become an important part of Aspen's economy. Tourists tell taxi drivers at the airport, 'Take me to a cannabis shop.'

Still, there is one thing all of Aspen’s dispensary customers appear to have in common, said Jordan Lowe, one the managers at Euflora’s Aspen Dispensary—a combination of shock and glee as they walk into a store, and a desire for what she called “the full Aspen Experience.”

“I get a lot of really awesome locals who come in; I know them by name,” said Lowe.

But along with those locals, she said, waves of tourists enter the dispensary and “want to have a lot of attention, which is great, we like to give that to them,” she noted. “[We] answer all their questions, introduce them to the industry.”

The key to that Aspen cannabis experience, according to Lowe, is letting customers shop at their own pace. In comparison to dispensaries outside of Aspen, she said, “we don’t put you in a box and make you wait and wait and wait, and take your ID from you; we definitely don’t act snotty when you ask a question that might seem simple.”

That easygoing philosophy seems to suit the vacationing clientele and dispensaries alike.

“Everyone here is on vacation so they’re in a great mood,” Kevin Doxtater, manager of The Green Joint, told Leafly.  “They are a little bit higher income so they don’t really care [about prices]. If you go to our Glenwood store [about 40 miles down the valley from Aspen] we’re trying to help our locals save money. Out here you don’t tell them the price; they’re like, ‘I’ll take ten of those.’”

While a lot of first-time customers may not be familiar with cannabis, there’s also a large portion that can remember back to the bad old days before legalization.

“They’re always taken back,” said Doxtater. “They’re always like, ‘Oh my God, I’m like a kid in a candy store,’ and ‘I’ve been waiting my whole life for this.’”

There’s an especially giddy and amazed response from some of the older consumers, according to Lowe.

“I get this, ‘I never thought in my lifetime it would be legal, I went to prison for ten years for selling a lid [an ounce] to somebody,’” she added. “And that’s the worst story, I hate hearing about that. I hear it all the time, too. People who had to spend jail time and prison time even, for consuming or possessing or selling marijuana.”

Another thing that makes shopping for cannabis in Aspen extra special is the chance for a celebrity sighting. Lowe says that a lot of the repeat customers she sees in her store are celebrities.

When the Ski Slopes Beckon

The majority of Aspen’s dispensaries are just a short walk from the entrance to the Aspen Mountain gondola, the gateway to the town’s iconic ski slopes. And a lot of those skiers and snowboarders are looking for something to get them elevated, when they’re up in the higher elevations and getting ready for the downhill rush.

Consume wisely. 'Recommending any type of mind-altering substance, prior to attacking a major mountain, isn’t a good idea.'

There’s a problem, though, at least theoretically: not only does Colorado state law prohibit the public consumption of cannabis, nearly all of the ski resorts are located on federal land. In reality, however, it appears there’s little chance of anyone being prosecuted or cited under those laws.

That being said, when customers ask dispensary staff what strains and products they might recommend for skiing, most of those employees are reluctant to respond.

And even if cannabis was legal on the slopes, “I feel like recommending any type of mind-altering substance, prior to attacking a major mountain, isn’t a good idea,” said Joseph Brockman, assistant manager at the Green Dragon dispensary in Aspen.

But many skiers in Aspen and nearby Snowmass seem to openly flaunt the public consumption rules.

“I see it all the time,” said Euflora’s Jordan Lowe. “I smell it when I’m on the chairlift; the person in front of me will be smoking.”

Along with vacationers in full ski gear trudging towards the lifts, people limping along on crutches are another common sight in winter-time Aspen. For those walking wounded, cannabis has become a new and accepted way of treating their slope-related maladies.

“People are coming from the slopes all the time, saying ‘I wiped out, I need something,’” observed The Green Joint’s Doxtater.

“People get hurt out there, unfortunately, every day,” said Lowe. “Yesterday somebody came in; she said her husband fell and smashed his nose. And she was getting all kinds of CBD edibles for him.”

Joseph Brockman said a lot of his dispensary’s customers are older cannabis consumers, who are “looking predominantly for pain relief and not so much necessarily a psychoactive experience.”

Gimme That CBD for My Knee

Because of that need for anti-inflammatory and pain relief treatments, several dispensaries in Aspen reported that CBD products, especially topicals, balms and salves, are now among their bestsellers. They’re especially popular with older consumers and repeat Aspen visitors, who deal with the chronic knee and back pain that can emerge after decades of skiing or snowboarding.

While Aspen’s residents, who can legally smoke cannabis at home, appear to prefer flower, the town’s dispensaries are finding that edibles, disposable vape pens and other discreet methods of consumption are among their top-sellers with the tourist set.

“Locals are interested in our flower deals…and our topicals,” Chase Corte, general manager at the Silverpeak Apothecary, told Leafly. “Tourists come in; they’re looking for just about anything. Lots of edibles and gummies and things of that nature.”

Among the flower choices, dispensary managers said that Blue Dream, Super Lemon Haze and other sativas or sativa-dominant hybrids are among the top-sellers in Aspen.

When people come to Aspen, added Corte, “they want to be upbeat, energetic. They’re here in Aspen to explore and do everything that Aspen has to offer. A lot of times [an] indica may keep them on the couch.”

What About the Aspen Police?

When it comes to the enforcement of cannabis-related laws that may affect a ski slope high, Bill Linn, the Assistant Chief of Police at the Aspen P.D., has a very progressive viewpoint.

Linn also noted the Aspen Police don’t have a formal enforcement policy in place when they come across people consuming cannabis in public.

“But because we’re a tourist town, even though it is illegal to consume marijuana in public…if people are making a reasonable effort to be discreet, we wag a finger at them and send them on their way,” he said.

But Where Can I Consume?

Linn also understands the dilemma faced by Aspen tourists who want to consume their newly-purchased cannabis.

“You know, you can’t smoke it in the hotel room,” he said. “It’s perfectly legal for you to buy, and then you’re walking around with it and you have no way to legally consume it because of your hotel rules. So, we tend to be aware of that and be light-handed with people if they’re trying to meet us halfway.”

Cannabis, he added, has become an important part of the Aspen economy, especially among the tourists.

“I hear from the limo drivers and taxi drivers in town that they pick people up at the airport and say ‘where do you want to go?’ and they say ‘take me to a [cannabis] shop,’” he laughed.

Stay Out of the Car

Linn also said that few cannabis violations end up in trial, unless the case involved driving under the influence.  And while there has been a small increase in DUI cannabis cases since legalization, those cases remain minimal.

Other than that, he said, the dispensaries keep local police busy by checking fake IDs from underage would-be consumers.

“They’ll call us and say, ‘We have some questionable IDs here, would you come check them?’ And usually we know if they’re real by whether there’s anyone still there by the time I get there.”

In terms of the Aspen Experience, Assistant Chief Linn doesn’t think that cannabis has negatively impacted the factors that make his town unique.

“I’ve been watching [cannabis] for a while and honestly I don’t think it has changed it much,” he said.  “It’s brought it out of the alleys in a certain sense, and a little more into the light.”