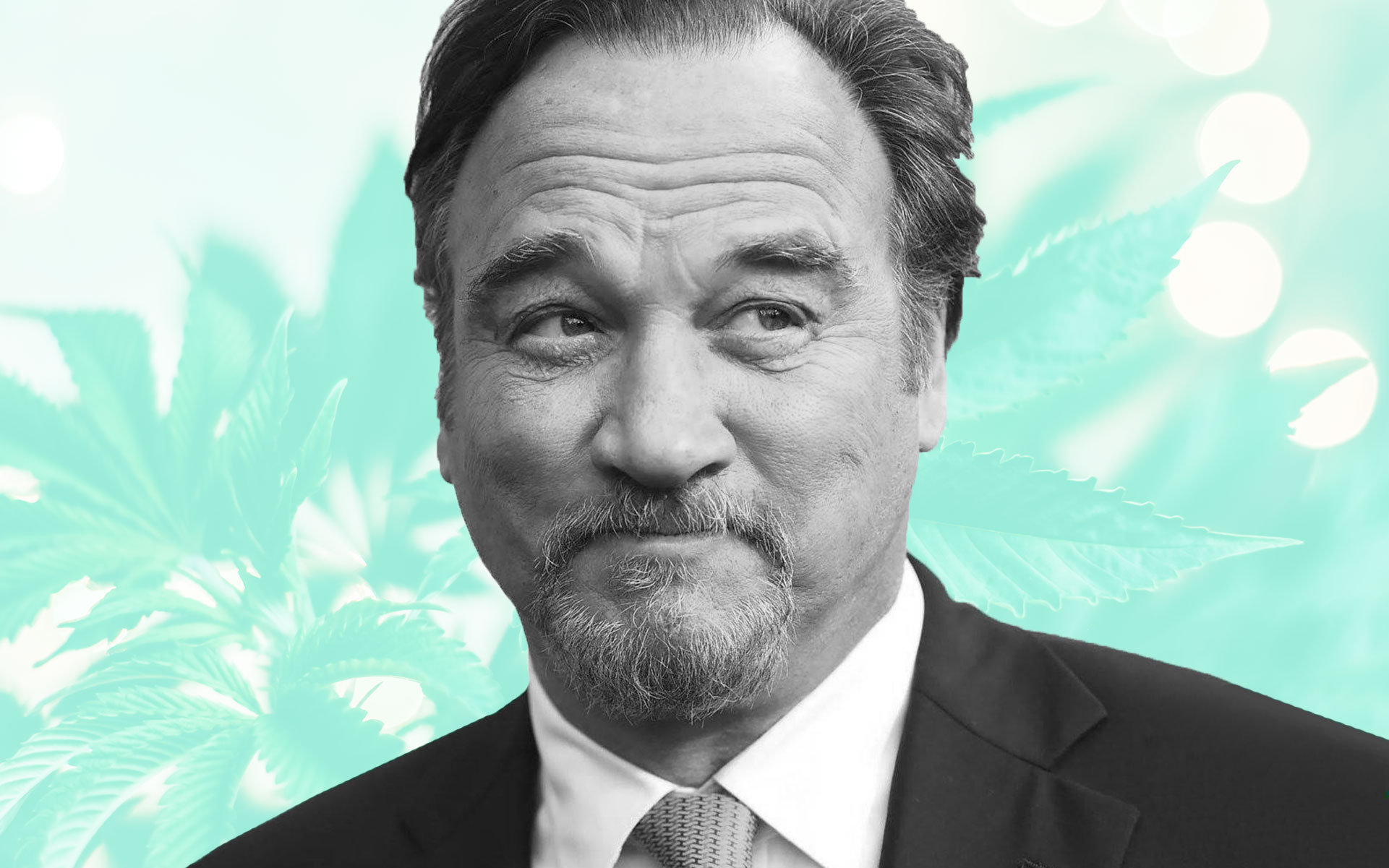 When actor and musician Jim Belushi talks Saturday Night Live’s early years—back when his brother served as a founding cast member and the show’s original wild card—he characterizes weed as “the smell of SNL.”

Specifically, he remembers a strain called Captain Jack’s, the scent of which hung around the writer’s room like an aura of grease at a pizza shop.

Find cannabis near you. Check dispensary menus close by.

John is working to establish the first ever opiates-for-cannabis trade-in program.

While he’s proud to bring Captain Jack’s to Oregon’s recreational consumers, Belushi only wishes that his brother John had taken to it the way his peers had. Instead, John embraced harder drugs and ultimately died from a combined overdose of heroin and cocaine—the same LA speedball that’s become infamous as a tragic punctuation to the narratives of numerous celebrated actors, musicians, and entertainers.

But Belushi has long accepted that he can’t change the past. Instead, he’s taken it as his personal mission to create exit doors on the nation’s ongoing opioid epidemic—which, according to the CDC, claimed more than 40,000 American lives in 2016 alone. To do so, he’s working to establish the first ever opiates-for-cannabis trade-in program.

We recently caught up with Belushi when he was in Gresham, Oregon at Nectar Cannabis, where he met fans, slang some dope, and spread the cannabis gospel.

Jim Belushi and His Rise in the Cannabis Community

In a money counting room and during a drive around Portland, we discussed Belushi’s path into the cannabis industry, family trauma from losing his brother, and his surreal career trajectory—spanning moments performing with President Clinton to his recent work advocating for opioid reduction measures.

Belushi says that when John died, the trauma irreversibly destabilized his family. After 35 years, he’s still picking up the pieces. Today, he sees a nation of people doing the same—structuring one family with the debris of another. Belushi believes that everyone experiences some form of familial trauma, and that cannabis can help clear the load-bearing wreckage. Here’s his philosophy:

Editor’s Note: Interview has been edited for length and clarity

Leafly: You own a weed farm and are actively moving the plant forward as a form of medicine and therapy, but let’s start with your youth. How did cannabis figure into your upbringing?

Jim Belushi: Well, you know, I will tell you: I got arrested twice in high school for possession. [One time] it was Indiana ragweed, and it wasn’t even any good…

We went to Indiana to pull some weed because we heard it was growing on the roadside. And we pulled a bunch of weeds, but it wasn’t weed. It was just weeds. We didn’t know. We didn’t know what it looked like. But our car broke down and the police came and we had all this stuff in the car. It was a complicated little thing…

You know, Frank Sinatra. It’s about a musician who became a heroin addict. I went, “Oh, Dad. Thank you, but I’m fine.”

As a musician and actor, how does cannabis figure into your professional life now? Does it play a role?

JB: No, no, no. First of all, I have a low tolerance. I’m not a big user because of that. I microdose it. I take like, one hit at a time, you know? It was always recreational in nature. You know, with buddies. I’m very fortunate to be thoroughly engaged in my craft of acting and music and directing, and so I never allow for anything to get between me and my craft.

I don’t drink when I work, I don’t smoke when I work, because my connection to my craft is very personal and spiritual and moving. So to answer your question long, no, I don’t mix the two.

You’ve mentioned managing trauma with cannabis. Can you speak to that a little bit?

When John died, whatever was left of the framework just incinerated and burned to the ground. That was a very traumatic experience for my family. And friends. And [John’s] fans. But for us, personally, it’s an out-of-body traumatic feeling.

“We’re adult children of alcoholics, collapsed family, trauma. So they pass on our need for medicine.”

I believe that everybody experiences trauma through their life one place or another. I believe there’s more severe cases, like a man I met on the [Oregon] coast—a veteran who was a medic in Iraq. He said, “I saw things happen to the human body that nobody should ever see.” He said, “My PTSD is so severe that I can’t even talk to my children and I can’t sleep.” And he said, “Your Black Diamond OG is the only thing that allows me to talk to my children and sleep at night.”

The men that came back from World War I saw horrors. They needed medicine. Alcohol. And then prohibition came in and went, “No.” World War II was even worse. Those men came back, and some of our fathers were stone cold alcoholics from what they saw. And we grew up. We’re adult children of alcoholics, collapsed family, trauma. So they pass on our need for medicine.

I believe if we knew what we know about medicine today—about marijuana today as a medicine—back in the ‘70s, there’d be a lot more people alive, including my brother John. So, trauma. I believe now that we can break down the cannabinoids and terpenes and we can blend strains for specific traumas. I believe that in the area of medicine, that everybody needs medicine.

I can relate to what you’re saying about collapse of family—the process of losing a loved one, of living with that loss, is without a doubt one of the most difficult and protracted traumas that we experience.

JB: There’s a beautiful documentary on Garry Shandling. And you watch his childhood. His brother who he loved deeply had a disease and took his own life when he was 14. But now you have a family circled around this disease, and when his brother died his mother turned to him. And the need—it collapsed the family. It’s not just the veterans who witness [horrors], it’s children of divorce.

I have a friend of mine, many years ago—Second City guy, John [Candy]—and I said to him, “Why are you so funny? You are so funny.” He goes, well, I get it from my family. I said, “Oh yeah, are they funny?” He says, “No.” He says, “My brother died in a car accident by a drunk driver.” He said it was like throwing a hand grenade into the family, with shrap metal ripping through different parts. Family collapsed. And he became funny because he used humor to try to heal the family. It’s an interesting cycle. And I really believe we’re doing great things for our community.

Could you tell me a bit about what you’re doing with the cannabis community and how the farm came about?

I got the old Elks Picnic Grounds, right on the river in Eagle’s Point. It’s 13 acres and I built a house there, refurbished the picnic grounds, and then the property behind me came up. Eighty acres of farmland. And a beautiful woman, Becca, who owned it, wanted me to have it. So before she passed, we made a little: I’d take care of her husband. He’s got a life estate there.

But, ya know, I had a farm and it was like, well, do we put cattle on it? Do we grow hay? Alfalfa? Then, in the state of Oregon, marijuana became legal—it’s like, oh! It’s the new agriculture! So I started with 48 plants. With Captain Jack and the great breeder-grower Jeffrey Iverson out of Bend—he’s got some great stuff; I’m gonna release his stuff in January.

Now I have seven greenhouse and 22,000 square feet of canopy.

How long have you been growing on the land in total? How’s Oregon’s cannabis climate been treating you?

JB: This is my third season. First year was medical, second year I started the commercial, and this is my third year—which, I feel, we’re firing on all cylinders. Except for the over-saturation of the market. Which, when we hold on, when the boundaries come down, everybody knows that Oregon, Northern California, and maybe Washington have the best weed in America.

I have a friend in Colorado who’s a very prominent grower and I said, you know, these borders might come down soon, and he goes, “I hope not! I don’t want all that West Coast weed in Colorado.”

A lot of the best weed that we got when I was growing up on the east coast was from Oregon. That was always synonymous with quality back when black markets were the only option.

JB: Guys are having trouble with that transition in Oregon right now. There’s guys with rec licenses who are selling out the back door. And they’re getting caught. I’m a midwest guy. A straight-up guy, a working-class guy. I came up in restaurants … OLCC created me a license and it’s a privilege. And I’m going to honor them and be compliant because we’re partners.

Members of your team mentioned that you hold a belief that the opioid crisis wouldn’t be what it is today if Americans had greater access to adult-use and medical cannabis. Can you tell me more about that?

JB: I was talking with [Portland-based cannabis attorney] Amy Margolis today about it. I’ve been meeting with the OLCC and policy makers at the governor’s office about trying to create an opiate-trade program—which is difficult because once you bring in opiates, you have to have either law enforcement or a pharmacist or a doctor to receive it. You can’t just give it to a budtender.

“I’d love to get that model here in Oregon, and then take it to L.A., Chicago, Miami, New Orleans—create a venue for people to get off opiates. Off of alcohol. Off of meth. Off of whatever. Off the street.”

We’re trying to come up with an idea, and we’ve been looking at locations in Old Town to create a pop-up dispensary.There’s a little law in the OLCC that allows them to give a rec license to a charity program, and you can give marijuana away for a nominal fee as long as it’s not in promotion.

There can be a recreational section, a retail section of this pop-up, where people can buy, and all the money will go to paying the employees and paying the nominal fee [to cover trade-in patients]. I want to make it available for people to feel better. So that opiate addicts, the veterans that cannot get marijuana [under federal healthcare plans], that can only get opiates because of all the restrictions—give them a chance and create a trade. And get people off the street, get people feeling better, get ‘em off those edgey hard drugs. And, you know, the devastation of how alcohol leaves you depressed.

So that’s what I’m working on. We haven’t achieved it yet. I’d love to get that model here in Oregon, and then take it to L.A., Chicago, Miami, New Orleans—create a venue for people to get off opiates. Off of alcohol. Off of meth. Off of whatever. Off the street.