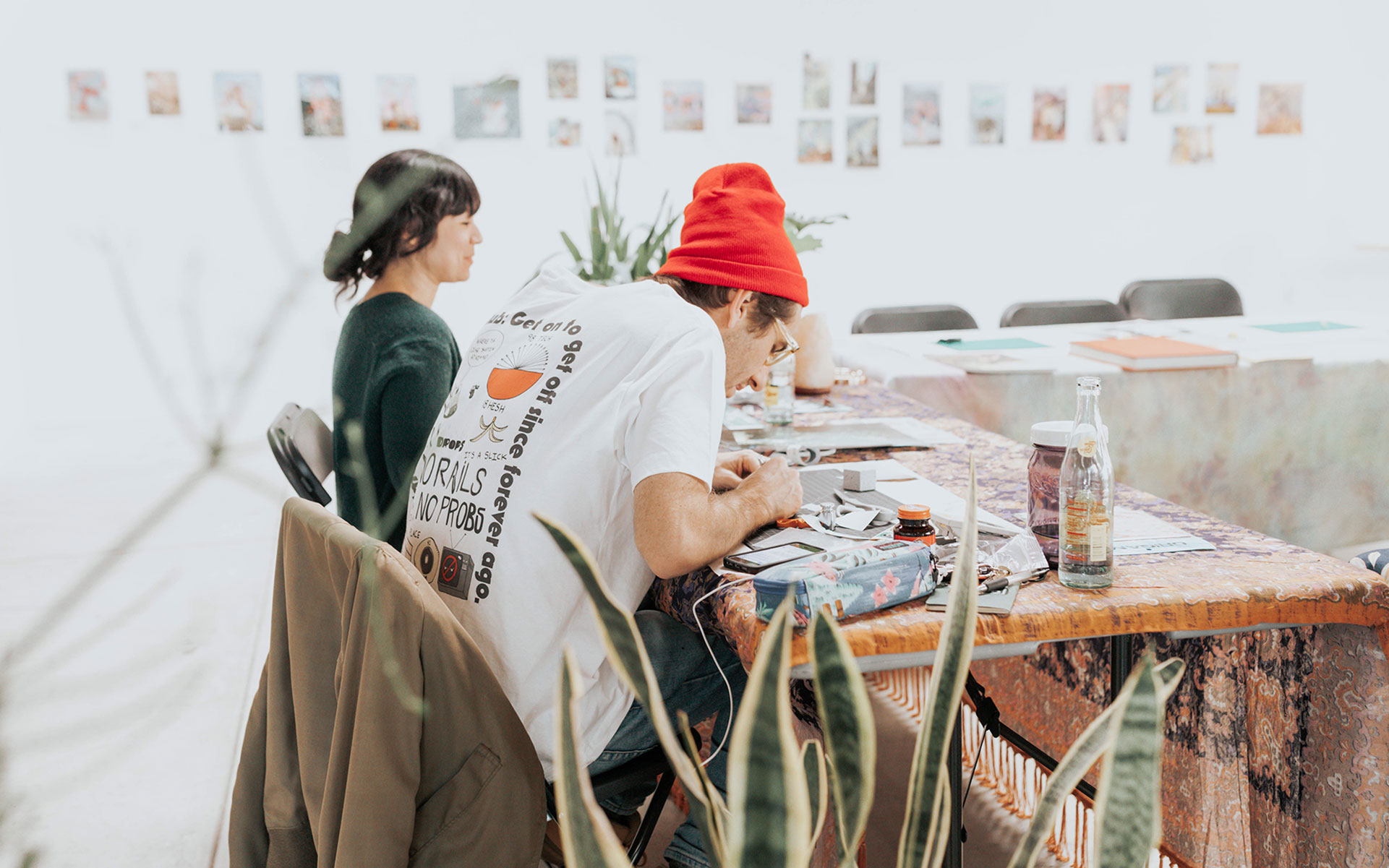 Zach Moldof is a creative extraordinaire, no doubt about it. “There’s lots of elements of my person that are crucial to my creativity,” he tells Leafly. “I think all of them have been influenced by cannabis.”

Zach produces a carefully curated menu of enjoyable goods birthed from passion and a wild imagination.

Zach Mobley dabbles in it all: illustration, design, photography, music, writing, editing, and of course, smoking. He’s an ex-writer for late 2000’s New York clothing giant MISHKA, with more bylines at Vice, Wax Poetics, and Noisey. He’s a musician and rapper, producing and releasing his own bedroom/lofi-style music under the name Zachg.

He’s also been a skater for decades and will always identify as one. He’s now a magazine editor and creative director for a new project alongside his wife, Tiffany Ruiz, called Stoke Much Magazine. And currently, he’s a videogame designer, creating pixel art for a new game he’s working on titled “Later Skater.”

“I should have a demo ready at the end of next month,” he says coolly. “Hoping to have a little title animation ready tomorrow. I can’t say much more about the game until the demo is released, but it’s different than everything out there. It will be released under the Stoke Much brand, and it will follow a similar ethos to the [magazine].”

Where it All Began: Passion and Inspiration From State to State

If social media is truly a showcase of one’s brand, Zach Moldof’s product is distinctly his own: a mixture of skateboarding, weed smoke, and vivid, focused imagination. Moldof is a rarity today—a self-sustaining artist who stays afloat with his own creative work. With the aid of his artistic life companion, Tiffany, he’s harnessed the ability to flex his mind and overtake his next endeavor.

“I wasn’t a bad person back then, but I did bad things.”

Regardless of experience level, Zach is dedicated to expanding his artistic output. Like a buffet, he has it all, but unlike Golden Corral, he doesn’t have multitude of off-putting offerings. Instead, he produces a carefully curated menu of enjoyable goods birthed from passion and a wild imagination.

Originally from Broward County, Florida, and raised in the Everglades, Moldof moved to Orlando to attend UCF for advertising, and eventually moved to New York in 2006 for grad school to major in liberal studies with a minor in creative writing.

“I wasn’t a bad person back then, but I did bad things,” Moldof recalled. “And I had a lot of problems with authority. To me, the class [at UCF] became about making fun of the teacher. I got lucky and had a class with Kristin Congdon. She’s a legendary anthropologist, one of the first people to put value on folk art and discuss it the way folks were discussing ‘fine art.’ She blew my head way open and introduced me to Marcel Duchamp, Dada, and John Cage. She opened all the doors and showed me who I was.”

Zach Moldof left NY for the Bay Area in 2010, spending time in Oakland, San Francisco, and Humboldt, before making the move back to New York in 2013. Then, he was off to Vegas later in the year, and eventually settled down in LA in 2015, where he met his wife and creative partner—and the half of creative agency Twin Beast—Tiffany Ruiz.

He spent his early days skating around with friends before stumbling into music and putting on hip-hop shows in Orlando, Florida alongside local legends Swamburger and Davinci. “I skated all the time and came up with ways to get away with non-violent crimes with my friends,” Zach said.

Zach’s ability to adapt with such fluidity is a superpower in itself.

Music and skating seemed hand-in-hand for Moldof, but it wasn’t until college that he’d truly realize his potential as an artist. “I would sketch stuff every now and then. But I didn’t know what I was doing. Back then, my creative energy was running my life, but I didn’t realize it. But I was also really into The Tao Te Ching. So I was cultivating a practice of being intentional, but also letting go and allowing direction to guide me.”

Zach’s ability to adapt with such fluidity is a superpower in itself, and Twin Beast’s Instagram and website is a testament of the range achieved via Zach Moldof’s self-exploration. With a massive plate of artistic endeavors tied with DIY ethics, Zach serves up imaginative pins, patches, stickers, t-shirts, books and zines.

His ideas teeter between cute and abstract yet remain simplistic in design. “These days I find myself flowing between mediums on a pretty long timeframe,” Zach tells Leafly. “I’m always working on a bunch of different things.”

Zachg’s music career was put on hiatus after his last record, Whole Tushie, released, and invited a Nazi to hack his Twitter and overhaul his entire internet persona. After the frustration of a sabotaged album roll-out—which included a zine that was bundled alongside the album—Moldof spent time refocusing his artistic outlook and took time to reset his mind. He picked up skateboarding again—something that he’d fallen out of touch with in 2011 after a car accident resulted in a knee injury.

Moldof drove around LA and dropped off posters and letters to every skate company he could find, looking for work in art departments and showing off his talents. After no luck, Zach and Tiffany decided to start Stoke Much, a skate magazine that intertwines skateboarding and the arts. He also consults for skating clothing company Altamont, while maintaining all creative forces with Tiffany on Stoke Much as a full-time endeavor.

Taking Risks and Standing Out

“Instead of focusing on the most shocking feats of athleticism, we focus on the creative culture of skateboarding. We are standing out because of the quality of our writing and design. The first thing that sets us apart is that we’re new. I’m not a veteran of the skate industry. And the other thing that sets us apart: We are not afraid to be controversial. But at the same time, we are being very intentional about representing all kinds of people in the mag and creating a depiction of skating that matches the culture today, rather than the culture in 1998.”

Twin Beast is betting all chips on Stoke Much and the couple’s collective future. “My wife has been the breadwinner for the last two years while I’ve been getting our business together and establishing the mag,” Zach says. “But she got laid off about a month ago. We have a son being born in December, and this felt like the right time for both of us to invest in our business full time.”

“The universe gave me a path and I followed it without fear. That path brought me many years of pain and suffering. But all of it was for this exact reason.”

Focusing all efforts into Stoke Much, Zach Moldof is willing to risk stability for believing in his artistic output, and he has every reason to. His ever-growing resume spans an impressive list of clients, from Urban Outfitters to Vice, and he’s no longer afraid to lose.

“I was homeless for about a year when I first got to the bay. I have ‘made the leap and believed in myself’ so many times and watched myself fail. The universe gave me a path and I followed it without fear. That path brought me many years of pain and suffering. But all of it was for this exact reason. All that time of “not getting what I deserved” was just time when I was investing in my future. I could be homeless alone. But as a father, I need a lot more, and the universe is providing.”

Alongside a family to keep him grounded, Moldof has cannabis to thank for keeping his duty as a full-time artist achievable. “I’ve been high since I got to California in 2010,” Moldof says. “I smoke after I get out of the shower, then make a breakfast smoothie with hemp protein. Start working, and then I basically smoke every hour or so. It’s a little more than microdosing I guess, but I’m never really faded. It helps me focus, it helps me sort out a vast amount of variables in my life that can’t be directly factored.”

“Right now, I smoke Original Glue and Jack Herer. I love all the Jack variants. I love Cinderella 99, but that is a tough one to find.”

“It definitely helps with art” he continued. “I can make myself sit down and work, no matter what. But if I’m not high, it’s way more of a struggle. But at this point, I spent a lot of years working in cannabis, I sold weed for mad long. There’s lots of elements of my person that are crucial to my creativity. I think all of them have been influenced by cannabis. Either as the direct result of getting high, or as the indirect result of me earning a living through cannabis.”