Why I Went on Tucker Carlson Last Night to Defend Legalization 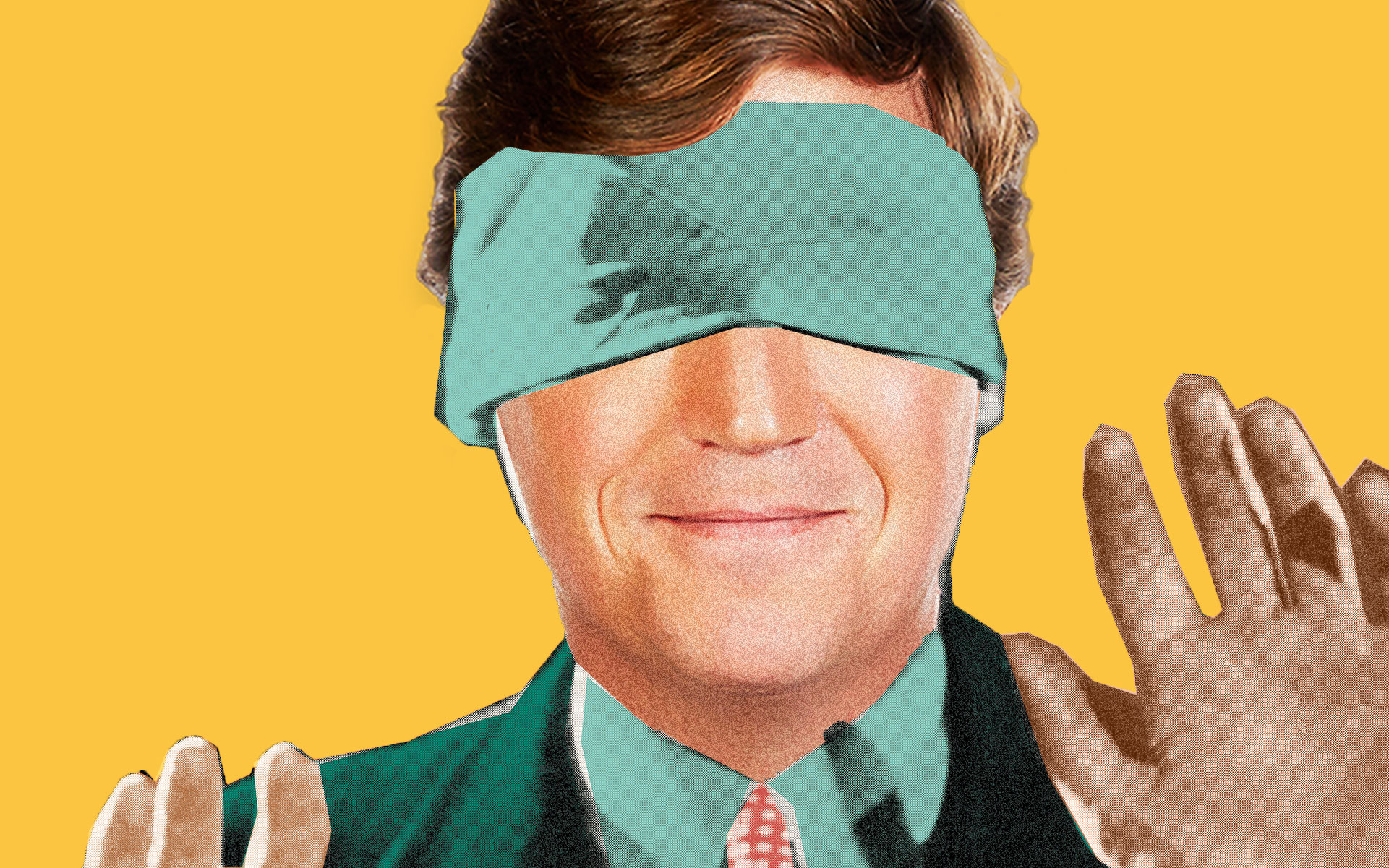 I don’t consider Fox News to be a credible source of information. And I find Tucker Carlson to be an abhorrent race-baiting fear-monger.

I know what I’m getting myself into by lying down with these dogs. I’ve been on Fox News before.

So I had to weigh the pros and cons carefully before confirming an appearance last night on his de-facto propaganda program to discuss Tell Your Children: The Truth About Marijuana, Mental Illness, and Violence—a sensationalistic new book from a former New York Times reporter that’s been getting a ton of media attention.

Carlson’s team contacted me based on this Leafly article, in which I pushed back pretty hard on author Alex Berenson’s contention that there’s “a hidden epidemic of violence caused by marijuana.” In that piece, I wrote:

There are valid concerns about potential health risks with cannabis, especially for younger people with still developing brains and anyone with a history of schizophrenia or a latent susceptibility to it. So a thoroughly researched, objective look at the latest science surrounding cannabis and mental illness would be both well-timed and a welcome addition to the literature. But unfortunately, Berenson’s book is full of false alarms, nonsense correlations, and long-debunked theories.

Berenson’s bullshit may be transparent, but it still went wholly unchallenged in a New York Times op/ed he penned and in a fawning profile of Tell Your Children by the New Yorker’s Malcolm Gladwell. So please don’t think I’m picking on Fox News when it comes to media coverage of Berenson’s dangerous and delusional book.

Cannabis prohibition has always been a disastrous public policy, unjustified based on the facts, and unjust in its execution. So it has always required a massively hyped propaganda campaign to maintain its public support.

Here’s a typical headline and lede from a newspaper owned by William Randolph Hearst, circa January 31,1923:

By the tons it is coming into this country, the deadly, dreadful poison that racks and tears not only the body, but the very heart and soul of every human being who once becomes a slave to it in any of its cruel and devastating forms…. Marihuana is a short cut to the insane asylum. Smoke marihuana cigarettes for a month and what was once your brain will be nothing but a storehouse of horrid specters. Hasheesh makes a murderer who kills for the love of killing.

Propaganda like that may not have proven terribly effective at stopping people from smoking cannabis, but over the last hundred years it has succeeded in whipping up enough irrational fear about cannabis to provide the government with a pretext to wage endless war on its own citizens.

In 2017, according to the FBI, 600,000 Americans were arrested for simple possession, with the poor and people of color vastly disproportionately targeted.

So no wonder Tucker Carlson thinks legalization is a big mistake.

Check Out the Game Film

To get a better idea of Carlson’s thinking on cannabis, including how he rhetorically approaches the subject in an adversarial interview, I ran some game film. A 2018 segment with Mason Tvert, Director of communications for the Marijuana Policy Project, was particularly instructive. Tvert was a driving force behind the campaign that made Colorado the first state to legalize cannabis in 2012.

I honestly found Carlson’s takeaway to be baffling:

“I would concede that in a lot of ways marijuana is less threatening than alcohol, but it’s also less deadening. And that’s the point… The government wants to make money in tax revenue, but it also wants to keep young people passive and stupid and less likely to complain and revolt.”

All I wanted was to smoke a little reefer and listen to some hot jazz—meanwhile Tuck’s bringing down the government.

Only, I’m not sure his conspiracy theory holds water.

The laws against cannabis have actually long been used to target radical political movements and leaders. A 1968 memo from FBI Director J. Edgar Hoover made this plain when it advised field agents to use pot busts as a way to disrupt groups engaged in dissent against the government—particularly the politically and socially active youth movements that comprised the New Left. Here’s what Hoover wrote:

“Since the use of marijuana is widespread among members of the New Left, you should be alert to opportunities to have them arrested by local authorities on drug charges. Any information concerning the fact that individuals have marijuana should be immediately furnished to local authorities and they should be encouraged to take action.”

Of course, it’s not like Tucker Carlson actually wants the left, new or old, to overthrow the government. So who, exactly, does he think should foment this long overdue revolt—if only they weren’t so stoned?

It remains unclear. But I’m reminded of the time former US Attorney General Jeff Sessions (whom Carlson has effusively praised) “joked” that he thought the KKK was okay “until I learned they smoked pot.”

Into the Belly of the Beast

Obviously, I know what I’m getting myself into by lying down with these dogs. I’ve been on Fox News before.

In the wake of the great Michael Phelps bong-picture scandal of 2009, I sat on the couch with the Fox and Friends gang for a fair and balanced debate about cannabis legalization. The hosts were shocked and outraged that a guy who won more gold medals than anyone in Olympic history had smoked some weed at a party. They all wanted Kellogg’s to drop him as a spokesperson.

At one point I pretty clearly let my contempt for Tucker Carlson slip out. I don't think that's necessarily a bad thing.

So I pointed out that Phelps had been arrested for a DUI in 2004, and it didn’t prevent Kellogg’s from hiring him. So why should he get fired just because someone took his picture without his permission while he engaged in an activity 35 million Americans enjoy responsibly.

Their reply: Yes, but alcohol is legal and cannabis is illegal.

Leaving me to point out that both drunk driving and smoking weed are illegal. But only one of them is dangerous. Which led to a bit of shocked silence in the Fox and Friends studio (and a very subtle thumbs-up from one of the camera operators that I cherish to this day).

This time, I’m not welcomed into Fox’s New York studios. I’m booked into a small room linked by satellite to Tucker Carlson’s broadcast studio in Washington, DC. I’m told to talk into a camera the exact size and shape as Hal from 2001: A Space Odyssey.

About ten minutes before my segment “hits,” a single earbud begins broadcasting one of Carlson’s rants against “the elites” directly into my skull, an experience that can only be described as dystopian.

I’ve written and rehearsed a set of talking points, which I review one last time before I’m introduced. But I also fully expect to be fed grossly skewed questions, attacked personally, and cut off mid-sentence every time I start to make a point. Meanwhile, my pointed questions back to the host will be ignored, as he quickly changes the subject.

So I remind myself that this isn’t debate club, it’s “theater”—as Jon Stewart pointed out during his famous 2004 on-air takedown of Carlson, who was then the co-host of Crossfire on CNN.

STEWART: This is theater. It’s obvious. How old are you?

STEWART: And you wear a bow tie.

STEWART: Now, listen, I’m not suggesting that you’re not a smart guy, because those are not easy to tie… But you’re doing theater, when you should be doing debate.

The bow-tie is gone, but the theater remains. And it’s a chaotic, confrontational, improvisational kind of performance.

Here’s How It Went

I’m cut off after the very first sentence I speak. Which happens again and again, leaving me to counterpunch, pivot, and slip in a quick talking point whenever there’s an opening. At one point I pretty clearly let my contempt for Tucker Carlson slip out.

Watching back the segment the next morning, I don’t think that’s such a bad thing. He is worthy of contempt, and I also suspect that on this issue he is uniquely at odds with a large segment of his viewership. According to the latest Gallup poll, a majority of Republicans now support legalization, and I’ll be damned if I let Tucker lie to them unchallenged.

Anyway, I could give you the whole blow-by-blow of how it all went down, but why not watch for yourself. While I didn’t say everything exactly how I’d like to, and certainly suffered a sustained bout of “staircase wit” right after the spot, overall I’m really happy that I got my points across and didn’t let that ill-informed know-it-all push me around.

Also, in the theater you perform not for the other actors, but for the audience. And so, while it was nice to get notes of support from friends and allies after the show, none made me happier than reviews like these:

@TuckerCarlson Got owned by the ‘marijuana advocate’ on his show tonight. Sorry, Tucker, it’s the first time I’ve seen you get dismantled in a debate. A shut out, a 50 – 0 demolition.
— Tom C. Purcell (@RealTomCPurcell) January 17, 2019

@TuckerCarlson did not look prepared for the marijuana segment and his guest made him look silly…..and I love Tucker and watch him religiously.

Listening to Tucker Carlson argue w/someone not only about something he doesn’t know anything about but in such a fashion as to make ignorant ppl think he’s right has considering changing parties. P.S. It was about marijuana
— Edie_(rhymes_with_Evie) (@edie_enriquez) January 17, 2019

@TuckerCarlson you just made yourself look like fool. If you going ask questions have something to back them up. That marijuana activist made you look bad. Not the Tucker I enjoy watching. Get it together man.

@IngrahamAngle Can use please smack Tucker upside the head? I’m a big fan of his but he sounded like a blue haired old fart in Washington trying to debate marijuana on his show. BAAAAD look. There goes the younger demographic.
— Duck Diggler (@Stunzeed) January 17, 2019